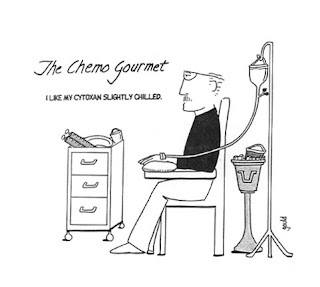 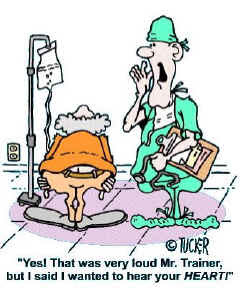 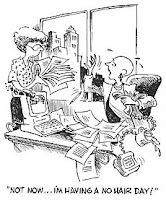 Actually, the cartoons are better than the jokes. The best cancer jokes have to do with breast or testicular cancer, and even for those, you have to be there. (My favorite is apparently a common practical joke for testicular cancer patients after their first radiation. They hide a light stick between their legs under the covers for the wife to discover.)

These don't have anything to do with cancer, but anyhow:
Real Doctors Notes
1. Patient has two teenage children, but no other abnormalities.
2. Patient has chest pain if she lies on her left side for over a year.
3. On the second day, the knee was better, and then on the third day it disappeared.
4. The patient is tearful and crying constantly. She also appears to be depressed.
5. Discharge status: Alive, but without my permission.
6. Healthy-appearing decrepit, 69-year-old male, mentally alert but forgetful.
7. The patient refused autopsy.
8. The patient has no previous history of suicides.
9. Patient has left white blood cells at another hospital.
10. Patient's medical history has been remarkably insignificant with only a 40-pound weight gain in the last three days.
11. She is numb from her toes down.
12. Occasional, constant, infrequent headaches.
13. I saw your patient today, who is still under our car for physical therapy.
14. Skin: somewhat pale but present.
15. The patient has been depressed since she began seeing me in 1993.
After all, we expect them to be good doctors, not good writers.
By the way, I'm still feeling pretty well, with minimal nausea and exhaustion. Medication helped me avoid the constipation of the last time, though maybe too effectively. There's always something.
Posted by Lucie at 8:10 AM

I have a friend who had open heart surgery. She discovered that her doctor had written in his notes: "This patient has no history of sudden death." 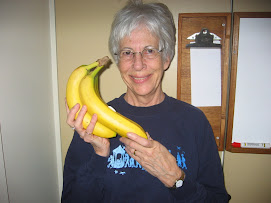